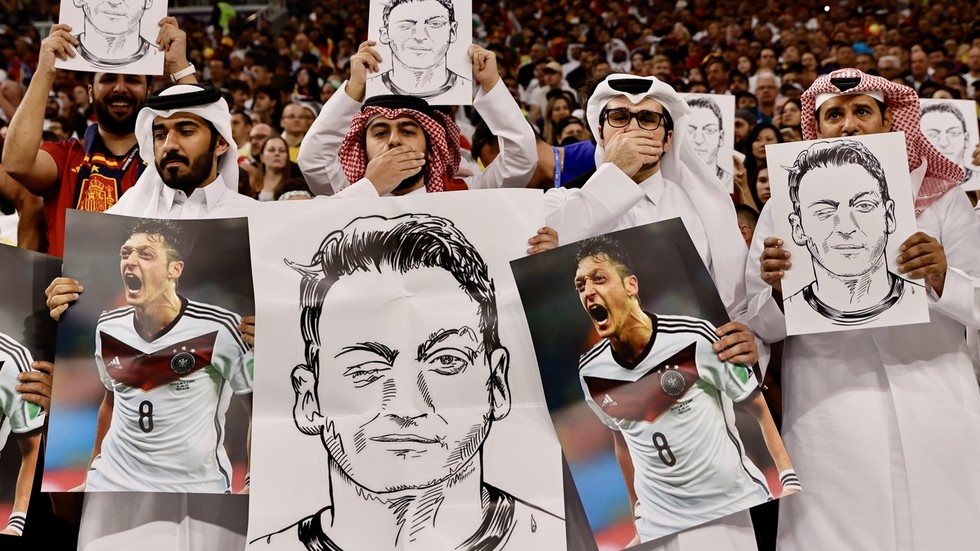 Images of Mesut Ozil were held up in the stands in Qatar. ©  Mohammed Dabbous / Anadolu Agency via Getty Images

Football fans in Qatar took a swipe at Germany during their match against Spain on Sunday night, being seen covering their mouths and waving posters of World Cup winner Mesut Ozil.

Protesting a decision by FIFA not to allow captain Manuel Neuer to wear a ‘One Love’ armband, German players had covered their mouths for their team photo ahead of their opening match against Japan earlier at the tournament.

Some fans in the stands at Al Bayt staged a retaliatory protest on Sunday, with some seen walking around covering their mouths and waving images of former Germany star Ozil.

Ozil retired from international football following Germany’s early exit from the Russia 2018 World Cup, accusing the national media of making him a scapegoat and suggesting he was subjected to racism due to his Turkish roots – including from the German football federation (DFB).

Fans in Qatar made their message clear, in what were widely seen as accusations of hypocrisy directed towards German football figures regarding their protests and supposedly contradictory treatment of Ozil.

Ozil made a return in the form of banners displayed in Qatar. ©  Jose Breton / Pics Action / NurPhoto via Getty Images

Four-time champions Germany went on to salvage a late draw in their Group E game with Spain, leaving their World Cup hopes hanging by a thread heading into the last round of games on Thursday.

To stand any chance of reaching the knockout stages, the Germans need to beat Costa Rica while hoping that Japan do not beat Spain.

Depending on goal difference, a draw could also be enough for Japan to progress to the last 16 at the expense of Hansi Flick’s team.